Forums member Mace points out that Mark Hamill and Malcolm McDowell are both voicing multiple characters on the Metalocalypse animated TV show. Metalocalypse, a dark comedy show about American/Scandinavian death metal band Dethklok, is currently in its third season and can be seen on Adult Swim. The two actors also did voice work together on the Wing Commander Academy animated series. Hamill, a prolific voice actor, was recently nominated for a Video Game Award.

Dethklok is the biggest, baddest, and most famous heavy metal band in the world. The quintet, consisting of Americans Nathan Explosion (vocals), William Murderface (bass), and Pickles the Drummer, along with Scandinavian guitarists Toki Wartooth and Skwisgaar Skwigelf, have to deal with their fame and other situations in their lives, all the while being monitored by a government organization out to destroy them. 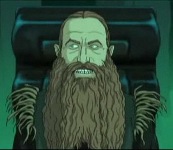