Everyone's favorite Blair is nominated for a Video Game Award in the category Best Voice. Mark Hamill earned the nomination for his part in Batman: Arkham Asylum. A prolific voice actor, Hamill has played the role of the Joker in most of the Batman cartoons and video games from the 1990s onward. The competition is made up primarily of Jack Black (Brütal Legend) and a few smaller names. Essentially a popularity contest, SpikeTV's award show is in its 7th year. In 2005, Christopher Walken (David Hassan, Privateer 2) won "best supporting male performance" for his work on True Crime: New York City. 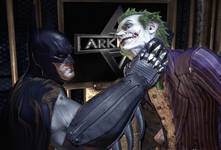