RapierDragon makes intricate paper models, and he's ready to take on the Famicon Gratha. Michelle D has produced these poses in order to digitize a workable paper model. His work so far has been quite impressive. 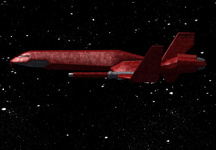 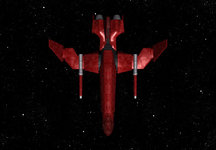 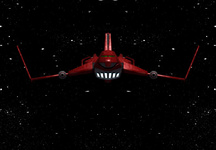 Saved the pictures you posted. I'm thinking I'll do a paper-model of it. I'll post pics (and offer the zip of printable cut'n'fold paper parts) when it's done... work will probably be done after I finish my current paper ship project.

I promise it'll be some spectacular paper work. I'm pretty good at taking a few snaps (like your 3d pics) and converting them into actual 3d paper-models.

FYI: been doing paper ships from the web-game, Dark Pirates (a sci-fi trading/piracy game over at www.darkpirates.com). The game has 16 ships (ranged from the small starter ship, Meteor, to the larger ships (several look like they were kilrathi designed... especially the Djinn, Stardragon, and Behemoth. Behemoth looks like a cross between Confed's Behemoth super-gun and the huge 4-pronged Kilrathi dreadnoughts ('cept its sharper points).

Wing Commander actor Matthew Lillard was a recent special guest act on the Dr. God live improv show at iO West, on Hollywood Boulevard. MovieWeb talked to him about his improv gig, past movie appearances and future plans. Lillard produced and also stars in the comedy/drama Spooner.

I've watched a lot of these shows and I imagine one of the harder parts is to kind of know when to jump in. Is that one of the trickier parts?

Matthew Lillard: You can definitely feel a vibe, like 'I could go here.' You can feel it, but what's hard is when you go on and have an expectation and it immediately goes south. You want to come in with an idea, but there's other times when you come in and neither one of you has an idea. You're both on stage and... But watching five times now, half a dozen times, I know that they're smart. I know that they're funny and it takes the pressure off. You don't have to be funny and that's the thing. You know that you can just let it happen. But yeah, I'm on a high. There's just a rush where you're on the stage in front of a bunch of people. That's something that, in my career... you know, it's not like an accountant does that, it's not like a lawyer does that, well maybe a lawyer, but it's this thing, a visceral reaction. It's really fun, and exciting and terrifying.