The stunning Scimitar model that Howard Day revealed last month got a good amount of feedback on the Forums. While he doesn't have any new renders for us at the moment, work is still progressing and Howard hopes to have the design wrapped up sometime next month. He also has a cool WC Pioneer update for us. 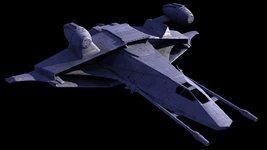 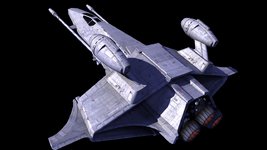 So I feel like I need to provide a quicky update here...And I have some interesting news! So on the Scimitar, I'm still working on it, but I'm neck deep in crunch time right now at work - with any luck, though, I should have pretty much the entire month of December off, and I should be able to easily wrap it up then. Not sure how much will get done between now and then, but I will try and get the landing gear started.

Now for the interesting news: I was out drinking with some guys from the office a week ago, and the subject of Wing Commander came up. I mentioned all the stuff Joel and I have been doing, and Marc Schaefgen (currently working with us here in Eugene, after flying up from Austin) expressed some interest in doing some sound work for the game...That's right, the original sound guy from WC1/2 and numerous other Origin games has an interest in this.

I was estatic. Now, obviously nothing's written in stone, and nothing has been agreed upon, but I thought this was cool enough to share. I showed him the Scimitar this morning, and he got all nostalgic.

And I'm sorta nerding out right now, you'll have to forgive me.

Anyhow, thanks for all the feedback guys, I'll try and do the old girl justice.

Did you know that we have a WC Encyclopedia that every Wing Commander fan can contribute to? While the effort has so far been focused on a few specific areas, everyone is welcome to sign up and work on whatever they feel like. Article templates have been set up for common entry types like character biographies, ship classes and star systems. Example articles (linked from the front page) demonstrate how you can use the templates for adding information in the standardized WCPedia style. General rules and guidelines can be found here.

To prevent automated spam abuse, new CIC Wiki accounts need to be individually approved. When registering, be sure to put a line or two into the 'biography' box to prove you're not a robot. If you're in a hurry to have your account approved, you can contact us or Dundradal on IRC, via e-mail or on the Forums.