Today marks the launch of the latest iteration of Sony's handheld Playstation, the PSP Go. The device is a fancy update of the PSP hardware designed to compete--somehow--with the iPhone. However, the release comes with a major warning for American Wing Commander fans: because the PSP Go has dropped the ability to read UMDs, it can not play Wing Commander or The Secret Missions (included in EA Replay) at this time.

It is possible that EA Replay will be made available as a digital download in the future, although Electronic Arts has launched the majority of their PSP back-catalog through the PSN store today and did not include the Replay package. European fans are somewhat luckier in terms of Wing Commander on the PSP Go: EA Replay has been available digitally in their region since earlier this year. 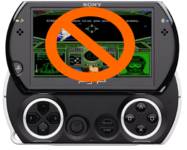 Today we begin our run through the Secret Ops fiction in earnest, with the document containing the game's "lead in" fiction -- the material that was posted (as static images, of all things) to the site before the episode releases began. Note that the game's temporary title is 'Wing Commander: Mission Disk', which is either a cause or effect of various contemporary retailers listing a Prophecy mission disk as being forthcoming.