Given that there has been increasing interest in getting the flashy OpenGL patch for prophecy to cooperate with the highres movie packs, HCl has waded into the fray with an updated DLL for you all. I'll let HCl explain what is new with this DLL and how to install it. In the meantime, download the patch here. 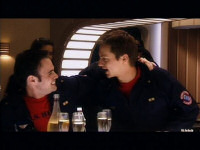 Please note: Direct3D and Glide support have been dropped. This shouldn't be an issue, however, since i don't think anyone is using these anymore (strictly speaking, Glide mode *should* work, but hasn't really been tested with the new code)

To install the new patch I suggest the following steps:

This should get the OpenGL, DVD and Multiplayer patches cooperating with each other without issues, so just run Prophecy.exe or Multiplayer.exe as usual.

There should be an installer later on with all these patches combined, but there's still some details to sort with the authors of the OpenGL patch, since the version currently under development apparently does something differently that the current DVD patch doesn't like too much.

Did you know that Standoff features extensive winning and losing paths? Dundradal has undertaken a project to visualize the game's mission tree. So far, diagrams of the mission branches from the first four episodes have been created in Edraw Max. These graphs should be a huge help to players that want to get the most out of Standoff! Winning and losing branches of Episode 4 are shown below. The older episodes can be found here.