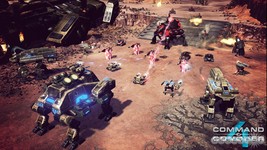 This is (it seems) Weston Giunta's project checklist for Wing Commander Prophecy -- when each element of art is to be completed. Good news -- it looks like everything is at 100% now.