Major Payne has posted an interesting update on the status of the Wing Commander Invasion mod. The Fralthi II cruiser has been added to the game and sharp new pictures are included here. Starbase and ship creation dynamics have also been adjusted a bit with a 'jump buoy' concept. Advanced ships will jump into the area as they are "built." Check out the full update below. 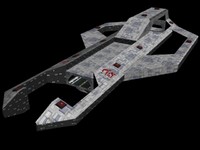 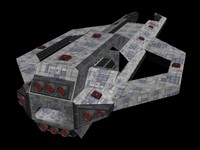 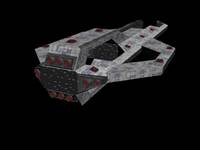 Progress has been relatively slow with only three Kilrathi capital ships ready for game conversion. I've also gotten my mitts on a shed load of extra models, so its a possibility that the Nephillim might not be included but the Border Worlds will instead (I'm not sure if I like the idea of including ships which technically "might" have animations needed for them). Hopefully though, I'll be able to get the necessary capitals done by the end of this week (crosses fingers for this), and I've got an idea for something which might prove useful.

The general idea is that IIRC WC uses a jump point idea. Well in EaW/FoC amongst the capturable structures is a space dock of sorts. I plan to replace the model with a Jump Buoy which the player will be able to "jump" into the game advanced ship classes and thankfully it's possible to give each side a unique selection of ships which can be added in this way. That will mean that the Confederation will be further upgraded than it already is with perhaps 6 or 7 additional capital ships and prototype fighter classes. This should give a bit of a tactical change for the standard playing game.

There are a few other map specific structures which I'll see about capitalising upon, but this is undecided as to what function they will provide at the moment.

I've also placed on display images of the Fralthi II and for the purposes of the mod, there is going to be two versions. One will be more of a carrier and therefore have fighter support but not be as well armed or shielded and the other will be a dedicated armed cruiser, having no fighter support but be heavily armed and shielded (truth be told I did mess up the original specs with the image/model I was originally using so decided to go with two versions).

Further update to come as soon as possible.

Mission F3 is the attack on the Nephilim communications base, which then allows the Midway to recapture Dula VII. These mission notes include an interesting cut concept, that alien patrols in the area will be 'timed'; navigate correctly and you'll face fewer bad guys. As the notes indicate, though, that's an awfully hard concept to get across to the player in a mission -- so it was ultimately cut.