Klavs has a ghastly new texture to share. He's paneled the interior of his impressive Hvar'kann class dreadnought model with "blood frescoes." These were made with a variety of pictures collected over time, so he's not sure where all the credit is due. If some of this grim art looks familiar to you, head over to Crius.net and let Klavs know. 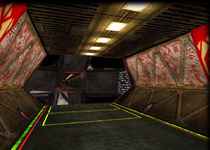 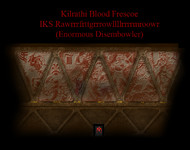 But it's a neat effect, I think, something the royalty of a pack of giant hunters would do, painting the walls with his enemies' blood.

Please speak up if you recognize somebody's work, as I want to make sure credit is given, if anyone recognizes anything. NinjaLA, you especially, I think I used some of your stuff, speak up if you see any of your stuff, and let me know if it's all right if I release the mesh with credit for your work. Panel 1 (Far Left) is definitely from Man Kzin wars, but for the rest, I have no idea.

E4a and b are a good example of the game diverging -- if you're playing poorly then you're stuck on an ordinary patrol... if you're doing well then you get to meet up with Kilrathi ships and blast an alien fleet!