Lego Plunkett On The Drawing Board

We've seen a number of Lego designs in the news lately, and a common theme has been their "mini" design based on creating the most recognizable shape with the fewest number of bricks. Iceblade is now working on something a little more elaborate. He's building a Plunkett class heavy artillery cruiser in Lego Digital Designer. One of the main triple heavy particle cannon turrets is complete and merged with a central body structure. He is still working on the forward and aft sections and additional weaponry. You can help provide feedback over at Crius.net. 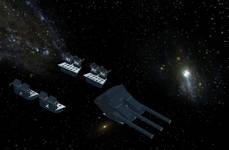 "Well, I spent some time on it and now I have the middle bar finished (barring some color changes) and part of the top of the center tower done... complete with BAT (big a$$ turret)."

Making the Game: Mission A3

Here is the third cut training mission, which puts the player up against heavy fighters for the first time. One thing to note is that these aren't especially well planned in terms of art objects: each "A" mission adds a different Kilrathi fighter to act as a proxy for the Nephilim ships faced later in the game (here heavy Vaktoth)... but each one would have necessitated another 3D ship be developed for the game.