Wedge has taken a break from his scholarly Wing Commander activities to try his hand at a new piece of WC artwork. The scene he's sketched out in pencil and ink is similar to the WC2 box art but features the actual TCS Concordia under fire from an unidentified wedge-shaped Kilrathi fighter. You can see both the initial sketch and colored in versions below. The color really helps bring the scene to life! 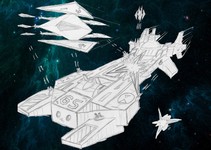 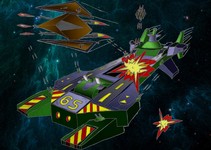 I had the sudden urge to redo a sketch I used to do often when I was but a wee lad. I don't recall seeing any hand-drawn stuff in the news for a while now. And yes, I know those aren't the Drakhri you see on the box...

Attached today is a master table of communications message types, which includes a look at one of the more interesting and unspecified portions of Wing Commander Prophecy - the fact that the various 'other wings' have their own comm trees. We can see here that some types of messages are "chained" - so if another wingleader requests a status report, for instance, you will then hear the other parts of the conversation. I imagine the system created to allow this functionality was in turn used on Secret Ops for the in-flight conversations that told that game's story.