Master Of The Brush & Joystick

Blaster has been working on some very creative pieces of Wing Commander art. He's been practicing calligraphy and posted these three samples. The first is a Kilrathi oath, the second is a set of Kilrathi characters and the final shot is a full sentence. I love it when people try out new things like this, and these are all quite well done. Read more about Kilrathi writing over at Crius.net. 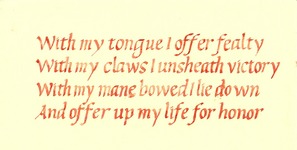 Today's update is an early list of the art assets -- 3D models and other objects -- that the Prophecy team needed from their artists. Two fateful decisions here: "This should NOT disappear when destroyed", referring to a space station but ultimately every capital ship... and "Eisen can be on the other side of the Jumppoint", cutting the game's other carrier into oblivion. Note the inclusion of destroyers and cruisers on the Confed side -- but that the various 'intro' ships (Devereaux, pods, etc.) are only planned for cinematics at this point.

DOS Days Turns the Clock Back to 1991