Shrike Two, You're Out!

The always-generous Sean Murphy was kind enough to send us some more Wing Commander Prophecy artwork! He saw Captain Johnny's Shrike update and dug up one more unique rendering of the bomber (below - in more ways than one)! He also explained the ship's... device... which can now be seen in more detail than ever before:

... the original design of the Shrike had two features that were eventually dropped: one, the cockpit area was supposed to detach and function as kind of either a mini-fighter or at least a lifeboat; and two, the large pod underneath was supposed to be a radar jammer - so the Shrike would be able to make torpedo runs with less danger of being targeted by capships. Sadly (and without letting me know so that I could redesign the thing!) the function of the jammer was tossed out, and the large pod underneath became just a torpedo tube. 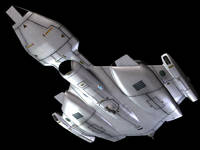