Vigilant Wingnuts have been busy over the last couple weeks with replays of Circe, Speradon, Telamon, Axius and Ella in progress. Some players have picked up fancy new toys like the Bearcat and Mace Missile. The community replay of Wing Commander 4 will reach the Ella Superbase by Saturday and continue into Sol next week. Here's a little sample of Lorien's adventures in Telamon.

Sosa calls me to the CIC with an urgent message. It's a distress call from planet FT957 in the Telamon system. They're under attack by unmarked ships and people are dying. Admiral Wilford is ordering the Intrepid to investigate the situation. Just because Telamon is a far away system doesn't make them any less important to the Border Worlds. Maniac's late to the mission briefing, which pisses me off a little given the situation. We don't know anything about what's going on in the Telamon system and we need to find out. To achieve that, I'll head out with 2 wingmen and Dekker's shuttle. We're going to head towards the planet and clear out any bad guys along the way. Once we're in orbit, Dekker and I will descend to get a firsthand look at the situation.

The first resistance we encounter are two Arrows making an intercept run. Both are equipped with cloaking devices but Hawk manages to take ou the first before it cloaks with a missile. The second fighter takes longer, but 3 on 1 odds means that the Arrow is chewed up every time it decloaks. Again, Hawk claims a victory in this fight. The second nav point features some other Border Worlds forces that Wilford must have sent through, I'm glad we're not in the unmarked death ships. Finally, it's time for Hawk and Panther to veer off and Dekker and I to descend to the planet. Halfway down, though, two Dragons attempt an intercept. The first one takes a missile to the rear to protect Dekkar and I take my time with the second, making sure it doesn't get near the shuttle. The Dragons are such huge targets that once you get behind them you can't miss.

Landing on the planet, we're confronted by several men with guns. I tell them that we're from the Border Worlds and have been sent by Admiral Wilford but they tells us we're too late. As they lead us into a shelter they explain that bombs were dropped on the colony, confusing me as the colony looked intact on our approach. A local doctor explains that it wasn't explosives they were dropping but bioweapons. Dekker points out the obvious, that we're still breathing and the doctor asks what I know about bioconvergence. I don't know much so he explains. He thinks the attackers dispersed billions of nanobots into the atmosphere. These nanobots are programmed to get into a human body and do a comparison of your DNA against some preset parameters. If they don't like what they find they cause your cells to stop replicating and start attacking each other. The body he shows me to demonstrate the results in particularly gruesome, though Dekkar doesn't flinch. I wonder what he must have seen during his career to let him stay normal in the face of that.

The doctor reports that the unmarked ships come out of nowhere and dropped canisters all over the colony. He hands me a cylinder marked with all sorts of biohazard symbols and I ask how many people were effected. The doctor's reply is terrifying, 90% of the colony has been killed. Dekker pulls me aside to tell me that this planet is now what he calls a ghost planet. If the people aren't cleared out soon, they'll start killing themselves in depression. I promise the doctor that Admiral Wilford will get a full report and take the appropriate action. I'm as glad as Dekker that the Kilrathi didn't figure this weapon out.

This is the fourth set of Feng Zhu "concept" ships, commissioned for an unspecified Wing Commander title following the release of Secret Ops. These are labeled as "multi-roles", which creates more questions than answers. Thanks to the convenient scales they seem to be larger than fighters - but not by much. Could they be Privateer-style civilian warcraft? They do seem to be heavily armed! 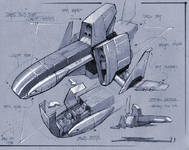 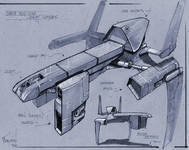 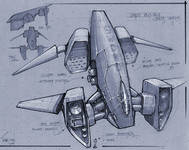 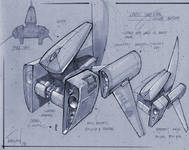