After a year of rigorous training, Origin founder Richard Garriott has made his way to space! He launched aboard a Soyuz from Kazakhstan with one NASA astronaut and one Russian cosmonaut bound for the International Space Station. RichardInSpace.com has footage of the launch and links to upcoming live feeds of ISS docking and hatch opening, which will occur shortly. Over the course of about ten days, he will participate in a number of scientific and commercial experiments, including wearing the Seiko Spring Drive Spacewalk watch. Sounds like he'll have a blast.

“Today, my dream of following in my father’s footsteps to explore new frontiers is being realized,” said Richard Garriott. "Throughout my life, my sense of adventure has taken me to the ends of the Earth to embark on journeys few people have encountered. It’s with honor and appreciation that I launch on my greatest adventure yet, and step into a role assumed by only five private individuals before me." Garriott continued, "I’ve dedicated this flight to not only scientific and environmental research, but also educational outreach. I’m thrilled to be able to excite students throughout the world and demonstrate how far our dreams can take us.” 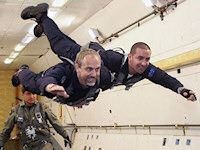