As part of a promotion for the upcoming Command & Conquer: Red Alert 3, EA has made the original Red Alert available as a free download. You can get both the Soviet and Allied discs from their site here. Be sure to read the instructions provided on the site to set up the included patch for playing the game in Windows XP or Vista.

What's more, Red Alert 2 is also being made free for those that pre-order Red Alert 3 from participating retailers such as the EA Store, Gamestop, and EB Games. Should EA announce that they are revisiting the Wing Commander series soon, it will be interesting to see what kind of promotions will come our way.

In other news, our future is going to be Tiberium-free as Gamespot is reporting that EA has pulled the plug on its Command & Conquer-themed first person shooter. The article cites corporate communications spokesperson Mariam Sughayer on Tiberium, "The game was not on track to meet the high quality standards set by the team and by the EA Games Label. A lower-quality game is not in the best interest of the consumers and would not succeed in this market." As Wing Commander fans who've endured our own share of heartbreak (Privateer 3, anyone?), we truly feel for any C&C fans that were looking forward to this title. 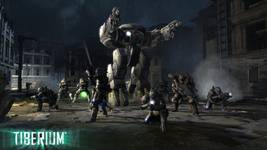 This is the Star*Soldier gloss for the first Port Broughton page:

CONCEPT: This was another late addition, which basically came about when I realized this would probably be my only chance ever to write prose set in the Wing Commander universe. It's supposed to give a little more life to the much-abused Midway map. It's patterned after the 'Interview with a Frontiersman' article in the Privateer manual.