This is the third week of the Wing Commander III replay effort. Depending on what happens in Blackmane, Wingnuts will get sent to either Delius or Ariel next. Here are DaveO's notes from Tamayo:

Eisen is here at the simulator along with Flash and some other pilots who want to see the action. Eisen explains that as a general rule he does not condone these displays of dominance. He says that I'm taking a big risk in terms of ship morale, especially if I lose. He gives me the advice to kick Flash's butt in the simulator. 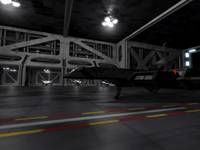 I have enough time to do the standard power configuration in my Arrow before Flash gets in range. He does shoot and hit me with two missiles at close range, so I need to evade and use decoys quickly if I want to win this duel. I have to use decoys multiple times, and then finally get a chance to use a full salvo missile launch. Flash decoys all the missiles away, so I'm going to have to keep trying. I'm able to launch two more missiles at the same time, and one does hit and damage Flash's Arrow. Flash taunts me and says that I'll soon be flying a wheelchair and that he's surprised at my reputation. No more missile launches of mine hit Flash, so now I playing the waiting game in letting him exhaust his afterburners. After a final desperate full afterburner frontal attack, Flash has made his mistake. With no afterburner fuel left, I pursue him aggressively from behind. After many successful hits to his rear shields, I take a chunk off his Arrow. His rear is definitely damaged, so it's time to finish him off. I again systematically blast those rear shields, and after several more successful hits I finally hit him enough to deal the final blow. Flash says that he'll honor our bet, and Vaquero says fighting the Kilrathi is definitely a different experience from test piloting. Maniac turns away in disappointment since he thought that I was overrated and expected me to lose the duel.

The series D section in the Wing Commander Prophecy designer's bible plots out the H'hrass System, where Blair is captured by the aliens. One thing I really like about these documents is the 'designer notes' sections, which can now serve as a sort of explanation and defense of the design decisions associated with each group of missions.