Team Technosaur is having trouble getting data off old DDS-1 and DDS-2 tapes. They've been successful in reading Exabyte tapes, but using the same method with the DAT tapes restores an empty (0 kB) file. LOAF adds that Windows Backup detects *something*, but it won't list any actual files. They have HP SureStore DAT24 and Seagate Scorpion tape drives that should be able to read these DDS-1 and DDS-2 tapes. There isn't much time left, so hurry and drop LOAF an e-mail if you think you can help!

Everyone is very busy at Mythic working 12-hour days, but here's a brief status update:

We began the day by finishing up with 3.5" disks (beta versions of various ~1994 games). Charlotte focused on CD ripping and finished almost the whole job. Chris finished major photography today. Scanning began and we found some really interesting WC stuff that we can't reveal yet.

Klavs has come up with resized versions of his Concordia render that will fit better on your Windows desktop. The wallpaper is available in normal 4:3 (2048x1536) and widescreen (2560x1600) resolutions. 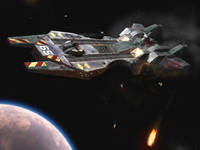 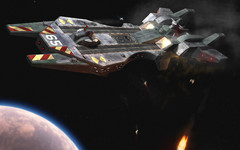 Today's Wing Commander Prophecy bible update has a lot of fictional ship background, including information on the unseen Confederation Mercury and Hercules-class capital ships. Here's a strange fact: the Hercules LC was originally called the Lamprey!