Here's a new batch of updated WC4 Homeworld 2 mod screenshots that include Aaron Thomas' finalized Concordia class gun turrets, engines and bridge textures. The turrets look particularly great in action. With the new hollowed out flight deck, there's also a cool new effect for launching fighters (described below). For now this model is finalized and Aaron has moved on to other capital ships seen in Wing Commander 4. 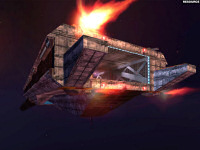 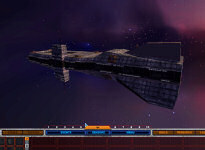 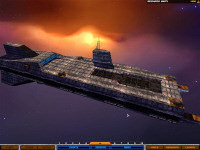 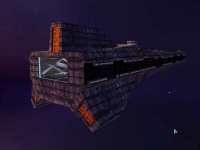 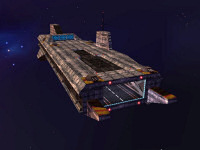 Now that the hull is hollow I had tried several ways to land the fighters. My initial attempt to make them taxi in and out of the side bays didn't work out too well. They kept flying through the walls and sliding all over the deck. Didn't look very nice. The way it works now is that they land on deck near the side bays and disappear. Then reappear in almost the same location when taking off. With some stretch of imagination it looks quite nice, however I don't think the HW2 developers ever planned for such a scenario. It's fun though - I just keep landing the fighters and watching them take off over and over again. :)