Michelle D has taken a stab at recreating the iconic New Detroit planetscape. She's tried a new cubic mapping technique and released two very different interpretations. I think the second attempt shows quite a bit of progress over the first. I'd like to see more of the second planet, but the industrial lights visible on the dark side are a cool and eerie sight as well. These were somewhat inspired by Marc's New Detroit renderings from a while back. 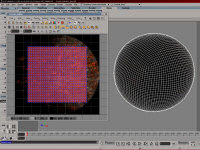 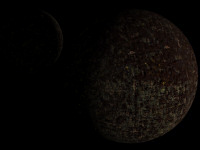 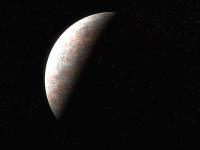 I searched for a while and found a nice tip for mapping planets - they use a cube and cubic mapping and then distort the cube into a sphere instead of using a sphere.

I just made my first sphere this way in XSI using the "PUSH" and "SMOOTH" tools. It took me a while but the results are pretty amazing.

On Friday, you saw how Wing Commander Prophecy's missions worked - now you can see how they fit together. This Series Flowchart document first shows how the entire game functions as a single progressive unit and then breaks down each series to show how the missions attach together.