Crius.net pilots evacuate to the Corsair System this week while they regroup and conduct some under cover recon in Dralthis recovered from the Ras Nik'hra. The Tiger's Claw has also taken on some new pilots - Jazz and Doomsday just joined the crew. WC fans are planning to complete the Secret Missions 2 together this month and move on to Wing Commander 2 in April. Here's Skanks with the latest mission reports.

Near Firekka 2: Back in the pancakes... this troopship better be worth it! The Gratha on the way to Nav 1 don't seem convinced so we afterburn to Nav 1. Amazingly the wing of Hhriss there don't realise we aren't Kilrathi! The Drayman jumps out... I hope we find it again soon. Get to Nav 2 where a few Jalthi are buzzing around, and thankfully the Drayman is here too! The unsuspecting Jalthi are made short work of, and it seems the marines have done their job too. We hook up with the Drayman and head home. Unfortunately the Kilrathi have other ideas and send a few Krants to stop us. They seem to underestimate us however as we easily blast through them and get the Drayman safely back under the protective wing of the Tiger's Claw.

Interlude: Doomsday and Jazz are back to the TCS Austin, Jazz seems a bit funny with me and seems insistent we'll meet again. Both of them seemed fairly decent pilots so I hope so.

Corsair 3: The Tiger's Claw is under attack! Hunter and I launch in Raptors, thankfully it's only some Dralthi and Salthi. Two of the Dralthi even turn tail and run! Nav 1 is clear, but Nav 2 finds a Ralari guarded by 3 Grathas. We manage to take out the fighter cover before turning ours guns on the destroyer. Nav 3 finds a Snakeir guarded by a mere 2 Jalthi, this is worrying, where is the rest of it's fighters? We take the carrier and its fighters out before high tailing it back to the Tiger's Claw. Surprisingly only 2 Dralthi are attacking her, perhaps the ones from earlier returned? We take them out in short order.

Interlude: Iceman says they have founds 2 human traitors. They belong to a group called the Society of Manderins, what could make a person turn traitor when we are fighting for our very survival? Knight has decided to pass up becoming a flight instructor, a shame, he'd make a good one.

Learn The Moves Of A True Master 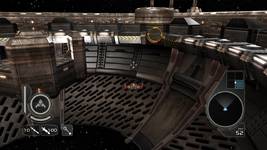 At the CIC we still get lots of questions about Wing Commander Arena, and one of the more common ones is how to get the tricky Ring Game achievement - Hot Dog. The Ring Game is activated by the blue tabs around the perimeter of the Firekkan bearpit station. There are different games on each side that are mirror images of each other. Navigating the rings seems nearly impossible at first, but it can be easy once you get a hang of the aerobatic fighter maneuvers. Learning some of the special moves can be a big bonus in combat as well. Kris typed up some pointers here to get people started.

You need to use a light or medium fighter for this. A bomber can't complete the tracks because you need to execute a loop for the high and low rings. And time is limited, so you need to hurry. I recommend a medium fighter because you'll need to make some very precise maneuvers and you risk overshooting in the Arrow or Darket. I completed the game in a Dralthi Rhino.

The right stick is instrumental here. Roll left and right to quickly make your way down the track. Keep the right stick pushed back to catch a low ring. Keep it pushed forward to catch a high ring. Keep one eye on the counter at the bottom of the screen. You'll see a number flash when you succesfully move through a ring (this is not always obvious for the low and high rings depending on your camera angle). For some parts you may need to back up a little and realign your ship or you won't be able to do the looping. Be careful that you don't back up through the previous ring or you'll have to start over! Save time by using afterburners for straight sections.

You need to complete the ring game three times in the same bearpit game (it's okay to die between turns). Each time you will be presented with a harder track. You should set up a private game with three other players. Two players can play the ring game (the two ring powerups are located at opposite sides of the arena) while the other two hang out in the pit.

Don't forget to take a cloak if you'll be doing this in a public game. If all else fails, drop by #Wingnut for some help setting up a quiet bearpit room to practice in.