JasonRocZ has come up with a new type of cargo ship for his Wing Commander: Collateral Damage project -- The Charon. The first two images are renders, the other shots were taken in the Vision engine. I'll let Jason explain the name and the design philosophy. 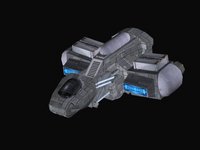 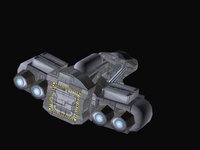 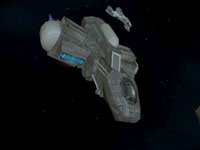 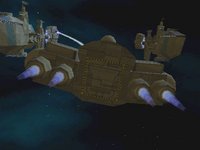 So in thinking that Charon was an dead being. I used elements of the Orion Fuselage, like the wheel and bars a little bit behind the cockpit (the bars are a lighter color), "he is commonly depicted as a living skeleton in a cowl, much like the Grim Reaper" [wikipedia] (which isn't that far off at least that's how I thought of this character) It would almost make it seem like the cockpit could be lowered when you land to touch the ground. So in thinking of this theory I tried to make the Transport, look as if it had bones, of sorts, it may sound corny but eyyy. You guys named the Buccaneer!!! Also Charon is a system in the Epsilon Sector which would seem like a main link between (2) Arena time frame important systems (Midgard, and Corsair systems) I made this transport pretty heavily armored but not heavy with weapons, also I had trouble putting a turret on it too. I was thinking that instead of meson guns for this to just have 2 plasma guns on it and call it a day. Also within the game I have taken the refire delay action of the Plasma a little less only reason being was to make it a little more close to Privateer type Plasma guns, and a little less damaging because of that fact. But in any even enjoy the screenshots, and any comments questions or concerns by all means I'd love to hear them, the more information and accurate information I can get in doing this mod the better.

We've now gone an entire year without an issue of The Point of Origin - and this February 20th, 1998 issue is the first of three available for this year. What's more, 1998 is the end of the line... but at least we get to see some reaction to Prophecy!

Meanwhile, Wing Commander: Prophecy is racking up its own share of honors. Computer Gaming World awarded WCP Space Sim of the Year. "The in-flight action looks better than the cut-scenes in most other games. With 3Dfx support, you'll hardly believe your eyes," CGW said. Gamespot added two awards -- Best Action/Simulation and Best Graphics for 1997. "From the varicolored lighting effects in the numerous locales to the amazing green ripple effect of an explosion, Prophecy sets a new standard for computer game graphics," Gamespot wrote.

... What can you expect from the press in the days to come? Strategy Plus magazine is planning a cover feature on Privateer 3 for its May issue. Expect that article to hit the magazine rack during the first week of April.

The team was given a clean slate in a familiar universe. They could incorporate the ebst elements of the first two Privateer titles and build in their own ideas to make it the best yet.

"We're happy to have the opportunity to bring Privateer back to ORIGIN," Nakamoto said. "ORIGIN's people like to have control over their own destiny and we'll do our best not to disappoint!"

A recent brainstorm session with development and marketing generated a long list of reasons it's fun to work on the P3 team. The group cites great chemistry within the team as well as great working relationships among development, QA and marketing.

"What I like about this team is that they're very self-motivated," Nakamoto said. "They have a great understanding of this product and they know what kinds of products the ORIGIN consumer likes to play."

The team faces several challenges in development; the most ominous is probably the multiplayer aspect. The press and customers are eagerly anticipating a multiplayer action game within the Wing Commander Universe and it is a challenge to deliver it well.

"We're addressing the challenges with multiplayer by doing the hardest parts first. If we can get multiplayer up and running for E3 we'll have plenty of time for play balancing before we ship," Nakamoto said.

Nakamoto has faith in the team and credits their ability to fit in to a new environment and work as a team.

"This is one of the tightest teams I've ever worked with. The people who came over from Sega have integrated very well with the existing team to become one tight, very focused development team," Nakamoto said.

By brainstorming with designers, artists, producers and marketing team members, PR has identified a number of "key messages" or selling points that will put Privateer 3 in a class by itself. Among them are the extensive exploration, the unpredictability of the gameplay and the 2000 locales the player can visit. Also, everyone is asking about multiplayer. When the multiplayer aspects are playable, the media will be impressed.

Marketing and PR are planning a comprehensive promotional effort including preview coverage in all of the major gaming magazines, an extensive online program and even a couple of consumer promotions like contests and events. Privateer 3 is also slated for a major presence at E3 in Atlanta in May.

1. Keep hitting "C" key to talk to people.
2. When using your Dustbuster, you pretend it's the Marine LC.
3. You "autoslide" when walking.
4. When you see a roach, you start looking for its wingman.
5. You make afterburner noises when passing cars.
6. When pulling into a parking garage, you wait for the "auto" light on your dash.
7. You use the power mirrors in your car like turrets.
8. You get upset when you can't get a torpedo lock on a truck in front of you.
9. You think Mark Hamill is a darn fine actor.
10. You end every conversation with "break and attack!".