Three Hats Are Better Than Two

McGruff has posted the source art for the TCS Princeton hat that was posted here last month. Even if it's not used to make something, the image is a cool design and makes a neat wallpaper. In our previous update, we also forgot to include the Tiger's Claw hat that was made for the Wing Commander movie. You can now compare all three stylish carrier caps together below. 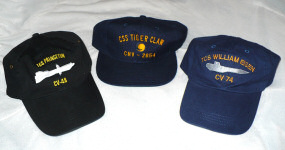 Here's the jpeg image for the Princeton hat if anyone wants to use it at a local embroidery shop. I was wearing the Eisen one and someone asked me if I served on a submarine. I told him it was a new type of carrier.

The big news in the October 6, 1995 issue of The Point of Origin is the release of Crusader -- which seems to be a surprise hit. It's interesting how little attention the game has seen so far -- it kind of makes you wonder which of Origin's similarly original cancelled titles might have had the same impact.