To celebrate the six month anniversary of Wing Commander Arena, the CIC is throwing a big tournament this Saturday! The event kicks off at 3:00 pm Eastern time (12:00 pm noon Pacific and 8:00 pm GMT) via XBox Live and #Wingnut. Participants will be playing in ranked free-for-all matches on the Space Station and/or Boneyard maps. Each session will have a CIC staff member to observe and tally the final scores. Top players will advance to successive rounds and compete to win fabulous prizes! Sign up and let us know you'll be there! Walk-up players will be welcome, but confirming now will help us plan. Now's your chance to hook up with some friends and start practicing. Feel free to stop by #Wingnut early and get set up. See you there! 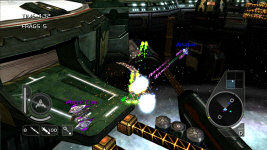 The Point of Origin has an all-new look -- it's more professional, more fashionable and less home-spun. Is this the first sign of things to come? Let's see what's inside... (Actually, the honest reaction to Pacific Strike seems fairly interesting to me.)

Point of Origin
Vol. IV, No. 57 - July 15, 1994
Contents
Spotlight: Summer CES: Back to the Future
In Ink
New Hires
EOM
All Ashore!
Galen's Best & Worst of CES
Ticker
A Bad(ge) Story
Point Man
Off the Clock
Carnival!
The Future