The Sci-Fi Models Annexe recently went offline, and they took about half of the existing Wing Commander paper models down with them. With a little help from Criticalmass, we've restored all the missing files, so Wingnuts can get building again We've also mirrored Anthony Greenfield's SWACS to avoid any similar disruptions in the future. Along with all the designs by Péricles, we now have a total of twelve different paper models available (thirteen if you count the different Broadsword variants). Sci-Fi Models Annexe was also working on a TCS Victory, but that design may never have been finished. You can view and build these ships for yourself with the Pepakura Viewer program. The individual file links are below. 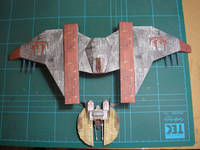 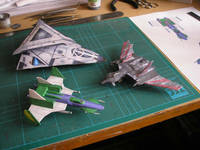 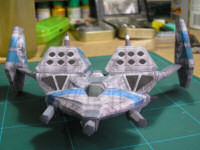 January 28, 1994 - the first Point of Origin of the year! This one includes a big story from CES, where both Super Wing Commander and the Interactive Movie line were officially launched. There's also an interesting note in the In Print section... about an appearance by Privateer in the TV show Viper. The episode was apparently called "Ghosts," in the show's first season -- anyone have a copy?

And the good reviews keep coming in for Privateer. In January's edition of PC Entertainment, Scott Wolfwrites,'Privateer pulls you in gently, then holds you with an iron grip.' Wolf gives Privateer a 4.5 rating out of 5.

Al Giovetti likes what he sees with Privateer. Giovetti writes for Electronic Games and gives Privateer a 90 percent rating. Giovetti says, 'Graphics, sound effects, music and speech are all entertaining. Privateer may be the best Wing Commander yet.'

Speaking of the best, the writers of Computer Game Review liked enough of what they heard on Privateer to rank it number one for Best Sound of the Year in the mag's rundown on the best games of 1993. CGR wrote, 'What makes the voices so great in Privateer is that they don't sound like they were done by the same people that show up in a lot of movies they show on late-night cable. In other words t hey were right on as far as acting ability and intensity.'

And in case you missed it, Priateer made it's network television debut on the NBC program 'Viper.' Several months ago, program producers asked ORIGIN for a Privateer box that could be used as a prop. It finally showed up in the January 14th episode. One of the characters even mentioned Privateer by name.

... The same magazine [PC Games Plus], which is published in Australia and distributed in Asia, Canada and the UK, alsohad some good things to say about Privateer. Michael O'Brien proclaims, 'Privateer is one of the most addictive games that I have played in a long time.' O'Brien closes by saying, 'To all the players who want a space game above the ordinary, Privateer is an excellent choice.'