A bar, in Wing Commander? Actually, this made it into the finished game - as one of the background loading screens. It was originally going to be the 'medal room' - awards earned in the game would appear here. Check out the Kilrathi character models - amazing! 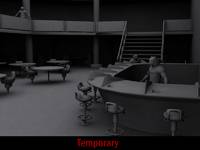