Electronic Arts has announced a new game in the Command & Conquer franchise - a first person spinoff called Tiberium. This new tactical shooter is set a decade after the events of Command & Conquer 3. Alien artifacts left behind in the last game lead to an invasion that the player must help repel now. In addition to action elements, the game will involve coordination between infantry teams, high tech vehicles and aerial/orbital elements. Of particular note is the length of the development process so far. Tiberium has been in the works since mid 2005, before even The First Decade was announced. There is no information on whether or not the game will feature a live actor film shoot, but the upcoming expansion to C&C3 will include a cast of celebrities in its FMV. Tiberium is expected to be released in the third quarter of 2008 for the XBox 360, PS3 and PC.

LOS ANGELES--(BUSINESS WIRE)--Dec. 18, 2007--Tiberium is a mysterious extraterrestrial crystal that shatters the energy output of traditional fossil fuels. It has the power to save our civilization. It also has the power to destroy it. Over two-and-a-half years in development, Electronic Arts Inc. (NASDAQ: ERTS) today revealed Tiberium(TM), a new intellectual property that brings a rich, original fiction to life through intense tactical action and visceral first-person shooting. Set in a stunning sci-fi world with spectacular visual effects and dramatic environments, Tiberium takes players on an adventure through an environmentally-devastated world and places them in the heart of an epic battle for control this powerful energy source.

Thanks to KSarty for reporting.

This is the third of three 'environment' concepts which seem to draw on the background imagery of the classic games. This one offers a massive star which arcs deadly fire onto the map. 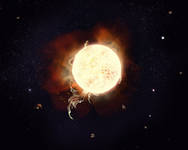