This is an especially cool one: the concept art for Wing Commander Arena's Boneyard/asteroid map. Check out how early the 'Kilrathi Head' was planned... and some of the cool things that were cut (including turrets and a spiral)! 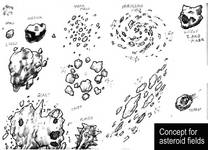