Get Schooled In Kilrathi Classes

Remember Prince Thrakhath's flagship in the Wing Commander 2 intro? A lot of fans remember the majestic KIS Hha'ifra from its brief cutscene appearances, but quite a few assume it's just another Ralatha. It's actually a fearsome Rigakh class cruiser however! LOAF whipped up a couple top/bottom shots to illustrate some of the unique aspects of each ship. The engine nacelles on the larger Rigakh are more like a Fralthra's, and the Ralatha has fewer of them. The Rigakh also appears to have a large bay opening in its nose. 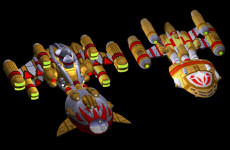 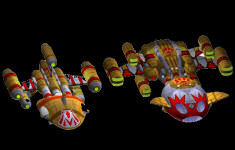 Always eager to seize a good opportunity to play with Wing Commander 2 ships, Marc has posed the Rigakh and Ralatha next to a Fralthra and Kamekh. 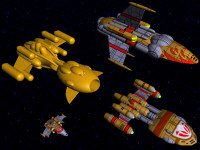 I don't have the original to render out, but here is the Rigakh (of course, not to scale).

Another Wing Commander III/IV ship considered for Arena was the Longbow bomber! The folks at Gaia liked the Longbow so much that they slipped it into the finished build - you can find rows of WC4-painted Longbows parked all along the lower platforms of the space station map! 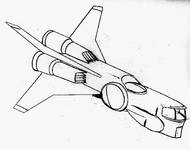