Lord British Gets His Wings

It's official - Origin Systems founder Richard Garriott is bound for the International Space Station! He will be launching aboard Soyuz TMA-13 in October, 2008 and returning ten days later on Soyuz TMA-12. While at the station he will conduct a series of scientific experiments now being developed. He's set up a website, RichardInSpace.com, to allow people track his progress over the next year. We wish him the best of luck! In a fun coincidence, Frosty and I recently visited the Apollo spacecraft that carried Garriott's father to Skylab in 1973 (right). 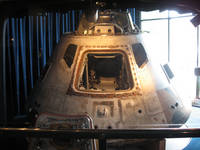