More Stories From The Fatman

Thought you'd seen the last update about Wing One? Not hardly! The Fatman submitted a news story to Music4Games announcing the project... and telling a few more stories. These are basically an alternate version of the published liner notes with some different comments and an interesting additional story about demoing the music at CES in 1990:

This is the soundtrack to the first Wing Commander game by Origin Systems.

I was asked by the game's producer, Chris Roberts, to write something that sounded something like Star Wars and Star Trek the Motion Picture. My Team Fat writing partner, Dave Govett, had this little tune (the fanfare/theme) in his head already. It took him about a day to get finished music to me--and with that one tune, game music took what is perhaps a bigger step than it had taken before or maybe since.

I hope I will be forgiven for saying that, at least for American PC games, it's hard to find a soundtrack with stronger musical sensibility, better composition, or better arrangements. This game supported the then-new MT-32 sound card--this was pre-General MIDI, and most games had just used the internal FM sound card--which was considered high-quality at the time!

In addition, Chris Roberts insisted on making the soundtrack interactive. There have been other interactive soundtracks before and since, but this one stood out. Wing Commander was the hit of the CES show that year.

A little secret: The clip being shown at CES was not interactive - the computer was only playing the dogfight medley music straight through. There was no intent to deceive, but the press was sure they were hearing the music interact with the players, and reported how impressive what they heard was!

You can find the article here.

Wedge009 found something we missed in the recent press kit update - two Targa images. He's converted them into web-friendly PNGs and sent them along. The first is a rendering of the TCS Devereaux in the Kilrah System debris field and the second is a shot of the TCS Midway exiting a jump point. Amazing stuff! 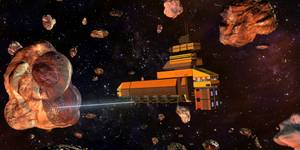 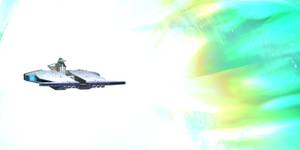