The first reviews are in! The August issue of Official Xbox Magazine has reviewed the finished version of Wing Commander Arena... and they are impressed! In fact, its 8.5 score has been surpassed only once by an Xbox Live Arcade marketplace title - a port of the arcade classic Street Fighter 2. What's more, Arena ties with Forza Motorsport 2 as the highest ranked title of the month - and Forza is a major release which is one of the biggest Xbox 360 titles of the quarter! Here's the word:

Wing Commander Arena
Where space is anything but a vacuum

Twitch space combat is hardly a tough sell, but so far on 360, it's largely been an offline pursuit for lone wolves anxious to put a gamertag in leaderboard lights. Any evil villain will tell you that human quarry makes for a more satisfying hunt, and Wing Commander Arena's heavy multiplayer focus proves as much.

That's not to say there's no single-player -- there is. As a rank amateur just learning the ropes or a top gun grabbing some solo-player down-time, you might defend space stations in a moderately amusing Asteroids clone, battle weak A.I. bots in timed melee, protect your mothership from waves of invaders, or just experiment in the Proving Grounds learning area. It pays to practice: though the simple fly-and-fire controls let anyone jump right in, the special maneuvers tied to the right thumbstick take time to perfect. Each war is waged on a 2D plane (ie., you move forward but not up/down), but you can barrel-roll away from missiles and throw off pursuers usings loops and quick U-turns, depending on which of the 18 unlockable ships you're piloting.

Once you're ready to go public, you'll discover Arena's beating heart: a frenetic 16-player cosmic Thunderdome of tense duels, frantic free-for-alls, and satisfying joint strikes. Work as a team or shoot anything that moves in boneyard canyons or space-station corridors; capture satellites that double as healing stations and ammo suppliers; or shred the gun batteries and bridge of the opposition's capital ship. Space is the lobby, so keep guns blasting while you wait for teams to fill out, or for your turn in the mano-a-mano bearpit. Since each well-balanced ship is outfitted with different tools -- cloaking devices, mines, tractor beams, turrets, energy weapons, and missiles -- swiftly assembled squads of complementary cruisers can wreak absolute cooperative havoc with gleeful abandon.

Wing Commander Arena isn't terribly inventive, but it so adeptly milks resonant genre basics that you won't care. Between equipment variety, handling differences, respawning pick-ups, and the cunning nooks and crannies of each map, the emergent strategic possibilities deliver surprising depth. All for a mere $10 on Live Arcade -- exactly the kind of change from the usual retro pace that we love to root for.

THE VERDICT
ON XBOX LIVE ARCADE
+ Frantic 16-player mayhem... for 10 bucks on Live Arcade!
+ Simple but strategically rich.
- Light on personality and "Wing Commander-ness."
? C'mon...not even one shot of the goofy alien race of Kilrathi felines?

LOST IN SPACE
Little has been heard from the series since 1997's Wing Commander: Prophecy and 1999's abysmal big-screen crossover. Arena is a blast, but it's hardly the space opera fans might've hoped for. Could we see a Command & Conquer-style rebirth, complete with Mark Hamill cutscenes? Let's just say eternal vigilance is the price of fandom, and keep our fingers crossed.

THE SOURCE: Origin Systems gave the world Wing Commander, Ultima, and System Shock. It was gobbled up by Electronic Arts in 1992, and killed off completely in 2004.

{CAPTION} Capital ships consist of three levels. Destroy all the defenses on one level, and the whole ship drops down to the next.
{CAPTION} Jumpgates can teleport you from one end of the map to the other.

The article also includes four new screenshots, scanned below! A scan of the entire article is available here (2.4 mb). The fact that a print magazine has reviewed the game means that the release is just around the corner... 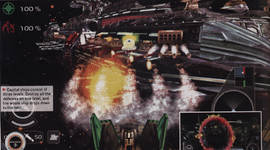 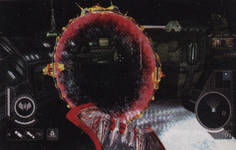 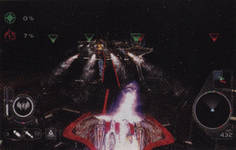 Raptor is back with another new episode in the long-running Holding The Line project. Chapter 219 is accessible below. HTL began shortly after Prophecy and Secret Ops were released, and the adventure borrows heavily from that era for its setting. It'll be interesting to see how they and other fan fiction groups begin to incorporate elements introduced by Arena into their stories.

After our last chapter looking at a possible future for the Kilrathi, we're returning to the battle against the Nephilim in the present. In this chapter, we're following the Confed and Border Worlds reserve forces fighting the Alien forces pushing in from the Loki jump point. WTH 6 is a long story, and will interweave with the third Check And Mate chapter (which follows the fight against the Nephilim pushing from Ymir) as the HTL battle heads to a climax, As I said on the Aces board recently, the end is most verily nigh. ;-) This particular story is written by James Andrew "JAG" Greenhow. Please send any and all comments to him, not to me.