Flanker has created another stylish model and ship diagram. This time it's a fighter: the F-103 Excalibur. Top/bottom and front/back views are presented along the bottom, and a sharp angled perspective is aligned with the ship stats on top. You can see how the ship evolved over the last week in the two images below or check out Flanker's previous designs here. 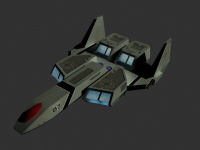 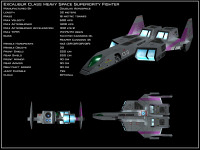 I like how it worked out with many small details and readable texts. Was at first planning to draw a condor or eagle on it, but I like the trojan helmet I found as well.

Don't know about warpaints, though most WC fighters appear to be green or like this one with checker markings and grey color scheme. Would be neat to see it in digital or foliage camoflage, but that is not very space like. Maybe something for a spec ops mission.

All Aboard The Starship Tiger Claw

AD was poking around the Fox UK website and ran across the product page for the Wing Commander movie on DVD. The Region 2 DVD was released much later in the United Kingdom than elsewhere in Europe, and they've posted a plot synopsis that we might not have picked up on before. It's slightly different than the brief write-up you'll find elsewhere online. Note the reference to 2004's Troy.

Wing Commander
In the mid-27th century the Kilrathi, an evil Alien race, are headed for Earth on a mission of destruction. The starship Tiger Claw and its elite crew are the only ones who can save Earth and all humanity.

Freddie Prinze Jr (Scooby Doo) is First Lieutenant Christopher Blair, the fearless pilot of the Tiger Claw, who with his wing commander Lieutenant Commander Devereaux (Saffron Burrows, Troy) is prepared to fight to the end to stop the Kilrathi destroyng everything they know and love.

Wing Commander is based on the popular computer game of the same name and is directed by Chris Roberts, the game's creator.