Auction: Diamonds on the Backs of Her Shoes

Veteran Wing Commander artist Sean Murphy, designer of the TCS Midway and others, has come across another interesting memento... and he's put it up on the auction block for Wing Commander fans. It's a Diamondback Squadron sticker, as made for the Wing Commander Prophecy film shoot! Sean says: "During the film shoot of Wing Commander: Prophecy, stickers were made of the various squadron insignia; these were stuck on the generic helmets the actors wore to individualize them, show what squadron they were in. It's about 3 and a half inches long by 2 and a half wide; it's nice and stiff, and has never been peeled off the backing." Wing Commander game props of any sort are very rare... so grab it while you can! Plus, lets face it: Sean's a great guy who's always looking out for us -- he deserves your money as much as you deserve a Wing Commander sticker! You can bid here. 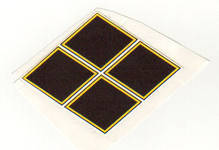