Mike Mann was going through some old things and came up with a neat classic review from the September 1994 issue of "CD-ROM Entertainment." It's a lengthy article that covers the enhanced CD-ROM edition of Wing Commander Privateer and Righteous Fire. The author is very impressed, and he spends a considerable amount of time describing the setting and backstory to the game. The gameplay mechanics, diverse locations and variety of factions also get special mention. Mike included some higher quality PDF scans with this one. Check them out below.

Included on the CD is the Speech Pack add-on that would cost an additional $24.95. Adding it to the $79.95 MSRP for the disk-based game, plus the extra $29.95 for the Righteous Fire, and the CD version becomes a great value, all of which only takes up about one to two MB on your hard drive.

Privateer is so attractive not only for the space combat simulation, but because you can build your own Privateer business and explore an enormous universe. The CD version is a plus since you'll want to have the game readily available for a LONG time without having to sacrifice the hard drive space.

DragonCon 2007 Less Than Three Months Away

The DragonCon website has been updated with a bunch of new information. More than two dozen new guests have been listed as attendees, and the Fan Tables page now lists the CIC's presence. We'll be manning a table in the Marriott lobby to help increase Wing Commander awareness. Stop by if you'll be in Atlanta this Labor Day weekend! 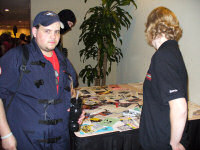 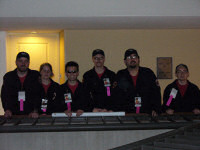 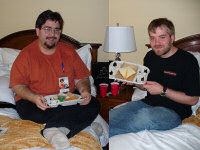