Wing Commander/Origin artist Sean Murphy was kind enough to send me hard copies of the Prowler artwork he scanned for an article several weeks ago... and there was even a previously unposted sketch! The image below seems to be the layout for a base of some sort - it looks similar to the sort of maps done for the original Privateer. You can find the original Prowler article Sean wrote for us here, along with many other character and mech designs! 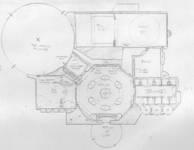