Gaia Industries, the developers of Wing Commander Arena, held an event this weekend to promote their other Xbox Live Arcade title, Street Trace NYC. The Street Trace community came out in force and, in the process, managed to snag some very interesting data on Arena. First up are these two pictures from the Gaia offices, which show a board of Arena concept art. They were taken by Wondermonkey2k, who has more from the event at his flckr page.

We can see high resolution renders of all six fighter types and one of the capital ships - hopefully we'll see these available as wallpapers from the official site! Even more interesting is the cockpit (upper right) and character (left) art. Is that a Firekkan? What are the Kilrathi symbols and knife images at the bottom? Keep in mind that this is all concept artwork - there's no guarantee that any of it will make it into the finished game... but it's pretty cool to see the process! 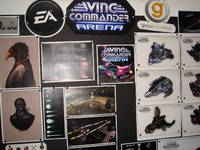 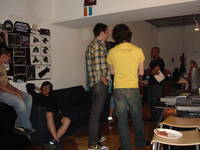 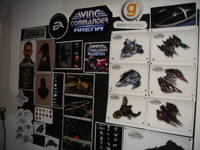