Kilrathi Kamekh On The Prowl

I always liked the Kamekh. After all the torpedo bombing missions in Wing Commander 2, it was nice to be able and chew through a big ship's phase shields with regular guns and missiles. The modest capship also appeared in Academy, Privateer and Freedom Flight. Marc took this classic Kilrathi corvette out for a spin to update the textures, and the results look pretty sharp to me.

Paladin signaled him with a thumbs-up, and the cargo bay door slid open silently a moment later. Hunter shoved the throttle and was out of the hold a moment later, pulling back to spin up and over the bulk of the freighter, turning back toward the station and the five Jalthi fighters that were pursuing them. Far beyond the station, he could see three Kilrathi Kamekh corvettes and a huge cruiser slowly starting in their direction. We'd better be out of here before they're in range, Hunter thought.

The 2007 DragonCon guest list got its first big boost this month with the addition of Brent Spiner, Jonathan Frakes and Roberto Picardo from Star Trek. In addition to friendly folks (with Wing Commander credits) like Margaret Weis and Bill Fawcett, this year's list of celebrity attendees is off to a decent start. Four-day convention passes are $50 until February 15, so order soon if you plan to attend. You can check out what the CIC staff and friends did at DC2006 in last year's gallery here. 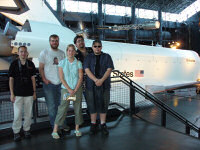 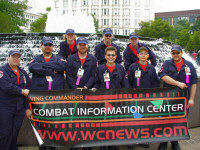 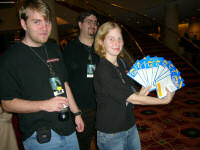