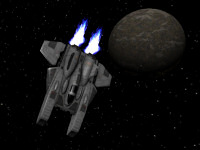 The Station Network has conducted an interview with Gemini Gold lead John Cordell. The article is in German, but criticalmass has translated it here. Most of the questions are pretty standard, but it's good exposure for the project to a wider audience. John also sent along a higher res picture of the Demon shown off in the piece. It's hanging blissfully in space near New Detroit.

STN: Which kind of improvements, apart from the obvious graphics, can we look forward to? Will there be, for example, additional player ships or software, so that you could have your turrets fire automatically?

JC: We will not fulfill those wishes of many Privateer fans yet. It's our opinion that those game enhancements should be introduced into the Privateer universe in an additional campaign together with fitting content, in order not to lose its credibility... Also, we want to give the opportunity to Wing Commander Fans to tell their own stories, using an easily modifiable universe.