Venice is finished! I've been hard at work playing through EA Replay. Since I've been getting a lot of questions about the game, I decided to post my thoughts thus far to the forums. At this point, I'm done with the first game (the winning track) and about half of The Secret Missions -- now abbrevated WCEAR and SMEAR resectively. I've collected my reasoning on the collection, the games thus far and all my notes on the difference between the PC and PSP versions of the games at the forums. I've included the good, the bad and the just plain bizarre. Here's the overview:

This is a good thing, as far as I am concerned. A game that makes you believe you are getting better as you go along is gold. The original Wing Commander did this fairly well, and Origin's Wings of Glory perfected the experience. WCEAR does this in spades; it may take half an hour to finish an individual mission... but by the time you get home, you will feel that you have truly earned you rfive kills. Would that Wing Commander III had given that same emotion. 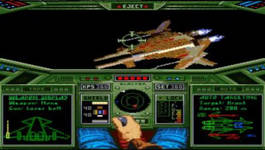 At the same time, let us admit that this is not wholly intentional. At best, it is half intentional, the result of the Mindscape team's best efforts to copy the gameplay of the original Wing Commander. The other half comes from the controls and the engine limitations on the (emulated) SNES A veteran space fighter pilot who has perfected the experience with a keyboard, throttle, rudder and joystick will have trouble adapting to eight buttons and a directional pad.

With some practice, though, it becomes second nature. EA Replay explains that the 'triangle' button is the "modifier". Keeping this thought in mind allowed me to figure out the controls with much more ease than previous console ports... they're intuitive once you put yourself in the right mindset, but they're maddening until that point. The amount of work you put into it is ultimately proportionate to the reward -- you will feel good when you shoot down your first Krant, you will feel good when you earn that first Bronze Star.

You can find all my comments in this thread, and we'll put together a polished review once the entire game has been finished!