The European Electronic Arts website has released a high resolution version of the Euro box cover for EA Replay. Although the game is not expected in that region for several weeks, it does seem to be on track for a November 14 release in North America. Most stores should receive it on Wednesday or Thursday this week! Alpha 1-1 reports that Toys R Us in Australia has begun advertising the game for about AUS$67 (about US$51), and the tentative release date is December 14. With the UK price being advertised at around £29.99 (about US$57), the American $19.99 price is quite a deal. This number was scaled down from $29.99 early on, and hopefully a similar reduction occurs elsewhere. Even if all the current prices hold however, importers are in luck. PSP systems can play games from any region.

Goku found this interview in the Holiday 2006 issue of PC Gamer. It's a talk with Michael Ironside and Billy Dee Williams about their experience so far with the live video shoot in Command & Conquer 3. The article isn't that long, but there are a couple neat photographs from the physical sets that have been built for filming. The response to C&C3's FMV cutscenes is likely to have a big impact on the prospects for future games with live actors, so we're all excited to see how things turn out! 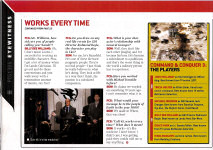