This is the final update in our series of lost ships. Special thanks to HCl for teaching us how to extract them! Wing Commander IV features a lot of bases -- in fact, it has more space stations than the original game had fighters. What it doesn't have is a Border Worlds base... even when you're ordered to rescue the biochemist from the Border Worlds, you do it by landing marines on a Confederation space lab. It looks like they had originally planned to rectify that, though -- with the Union of Border Worlds Outpost seen below. 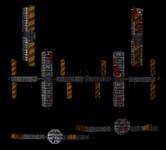 A Pro Stick Paired With an Action Hit