Sergio Leugi has also has a pack of wallpapers for everyone. Instead of one image, he's made fifteen Wing Commander shots to choose from. They each feature a popular ship from Wing Commander 4 or Prophecy. The source images for each fighter have been enlarged some, but the wallpapers should still look decent on medium resolution screens. Sergio created the images to match different desktop workstations when he was administrator of his university's computer lab. They were a big hit back in those days, and now he'd like to share them with fellow fans. You can grab the 3 meg zip with all 15 wallpapers here. 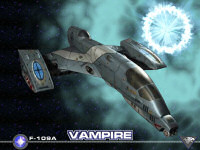 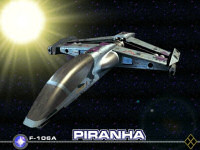 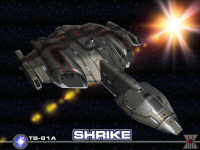 Since when I started my Computer Sciences graduation course and after working with computers, I have always been a fan of the WC universe. It was so present in my daily activities that when I became the system administrator of a small lab network, all workstations were named after WC universe fighters. It wasn't just the name. I did all the respective wallpapers for each one. Computer image editing is one of my hobbies. I made those using the Internet available renderings for each fighter and composited the wallpapers.