Richard Garriott's Tabula Rasa was once again on display at E3 last week, and the general consensus seems to be that it's finally turning into a somewhat solid game. This is an improvement compared to a few years of awkward re-envisionings that sucked away much of the original enthusiam for the project. Although it now looks like a regular large-scale shooter, there are RPG elements that significantly affect how combat actually plays out. GameSpot has a decent preview of the latest build of the game. The article talks with Tabula Rasa Producer Starr Long, who began at Origin in 1992. He's a neat guy who worked on Wing Commander Academy, Armada and Privateer, a number of Ultima titles and was project director for Ultima Online. Note the TR logo in the first screenshot. 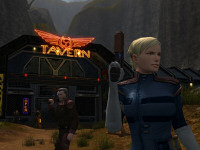 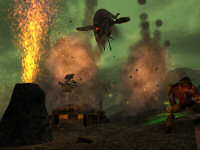 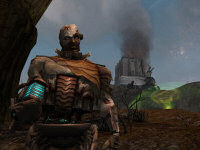 There are going to be dozens and dozens of weapons--including energy, incendiary, poison, and more--and enemies will be vulnerable to particular types of damage, so you'll need to make constant tactical decisions about what to use in battle. We got to play as a heavy-duty soldier type, armed with multiple rocket launchers as well as various magic-style special abilities, such as a particularly nasty chain lightning ability. The way in which the game combines both science fiction and fantasy conventions isn't entirely unfamiliar but seems unique all the same.

Tabula Rasa publisher NCSoft was also slapped with a $5000 fine for being too noisy at last week's show. The organization that runs the expo bumped up enforcement of rules for both exhibitors and attendees. Requirements to attend the show were more stringent, and models in swimsuits or lingerie were restricted.