HBO has snuck in several showings of the Wing Commander movie in high definition over the next couple weeks. This is in addition to a ton of regularly scheduled showings on the various standard HBO channels. Your main opportunities to catch it are Monday morning next week and Wednesday morning the following week.

If you've seen some of those new HD DVD players in advertisements lately, it's not likely that we'll see Wing Commander on that format any time soon. 20th Century Fox is developing movies for Sony's rival Blu-ray players due out later this year. Fox currently has no plans to support the Microsoft/Toshiba's format. Studio support should shift around as actual retail performance factors in down the line.

A Quick Peek at EA at E3

The 2006 Electronic Entertainment Expo come to a close, and GameSpot has helped wrap up by posting quick summaries of each major booth. Electronic Arts has one of the very best locations at the front of the biggest exhibition hall, and they usually deck it out in an exciting way. A giant circular EA logo marked the entrance to a 360 degree theater projecting videos from their 2006-07 lineup. Spore, Superman, Battlefield 2142, Crysis, Battle for Middle-earth 2 and other major games were playable around the outside of this ring. A few of GameSpot's pictures are below, but none are quite as neat as my favorite shot. Last year they also had a neat box cover collage. 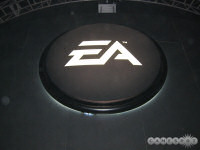 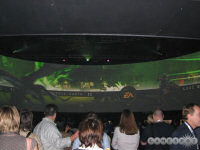 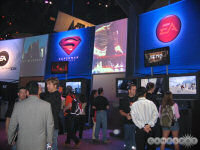 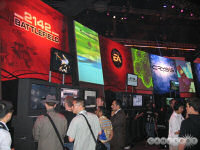 EALA VP Neil Young has also conducted an interview with CNET about the new things going on at the show and with the company. Mr. Young was the general manager of Origin at one time, and the Origin properties have since followed him to Los Angeles.

CNET: EA has taken some criticism for focusing so much on franchises like Madden. So how important are the Spielberg games to combating that impression?

NY: We need to operate a balanced portfolio, and we're going to have new IP we've built, as well as long-term [franchises] and short-term [franchise titles] that might be one-off things. If you look at the portfolio as a whole, everybody would wish we would increase the original IP things we're building. But Army of Two and Spore are big, new, original products. And Black, I think, is important. So, I would absolutely not hang EA's new IP hopes on a single title. Also, the LA studio is only one end of the spectrum.

CNET: We've heard the EA LA studios have a lot of empty space. What's the plan for that empty space?

NY: The first thing is that with the acquisition of Jamdat, we'll probably be up to around 700 people, out of a capacity of around 1,100. Today, it's like 500 people. But in terms of growing the studio, what I'm really focused on right now is making sure Battle for Middle-earth II for Xbox 360 knocks it out of the park. Also, we want to bring the Command and Conquer franchise back in a big way. And so it seems to me that being successful at those things are going to be drivers of growth. So are we going to double the size of the studio? Absolutely not...I'd rather have eight teams of 40 and figure out new ways to develop the content and figure out the right way to develop efficiency.