Sean Murphy has posted a blog detailing the charity bike ride he and his family took part in! You can read his story, which includes pictures, here... if you're interested in donating money for the cause (there's still time!), you can read all the details here. Sean was also kind enough to send along some details on what he'll be working on in terms of wallpapers:

I messed around with the Shrike model yesterday a bit, and am now possessed of an urge to do something I've wanted to do for a while: namely, rebuild the sucker. The model I've got is the old NURBS model I built for the game, but there are things about it I've never liked - especially in the texture area. I'm considering rebuilding it in polygons (which would, incidentally, make it ideal for use in any 3d package, not just maya), and adding more detail and touching up the rushed-over areas. It's kind of an old itch I've never gotten around to scratching. I think it'd be neat, and would result in some super-spiff high quality models. Of course, that'd slow down delivery of wallpapers but I think it'd be worth it, and I'd of course provide updates on how it's going to prove that I'm not slacking off! 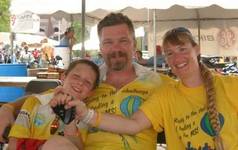 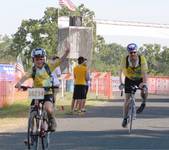 The render above features Sean's original Shrike for reference.

Phoenix has a correction to our Ghost Recon story.

Hey guys, just wanted to lend a little suggestion to the news about the junkyard contents. Those forward fuselages do not appear to be from MiG-21 aircraft. The cockpits are well too far forward, the canopies too bulbous, and the air inlets not tapering enough toward the forward opening. Also, the variable-position cone inserted in the intake is not the proper shape; it's too blunt and curvy, and doesn't fit the intake properly, to be from a standard MiG-21.

My guess, without pulling out references from my library, are that they may be from Su-22 Fitters attack aircraft.

The moral is simple: when you slice the front off of a Cold War-era jet to use as a prop, people will always get confused. From left to right: a striped SU-22 Trainer, the Ghost Recon junkyard fighters and the original Wing Commander movie Lightning cockpits when they arrived in Luxembourg. 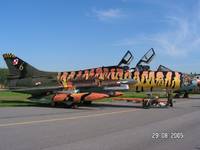 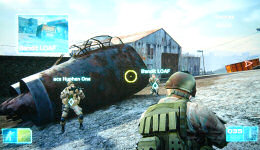 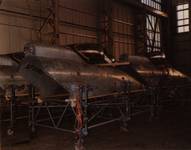