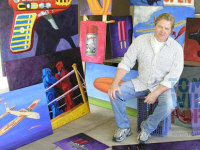 After a busy year of television shows and movies, Tom Wilson will be spending most of the year touring North America. He'll be hitting comedy clubs throughout California, Indiana, Florida, Nebraska, Texas, Virgina, Ohio and Alberta, Canada. You can find a complete list of when and where here. Tom is a super nice guy, and Wing Commander fans should get a big kick out of his shows. Mr. Wilson is universally recognized as a top notch stand-up comic, but he'll also be making an appearance at the Riley Arts Gallery in California to promote his extensive line of pop culture paintings. And for those who can't see him in person, autographed copies of his audio CD are now available in the Big Pop Fun Store.

Meet this multi-talented actor, comedian and artist. Acquire a signed poster, limited edition print or one of his new original paintings. Tom Wilson has enjoyed a successful career in films and television–easily remembered for his award winning performance in the three classic “Back To The Future” movies, as well as “Reba,” “George Lopez,” “Cold Case,” “Sponge Bob,” and many more.

His paintings can best be described by the reactions they receive–a moment of joyful surprise–followed by a happy longing.

* Get a FREE signed poster *

Tom Wilson's artwork can also be found on display in galleries in Encino and Santa Monica.