Ninjala has inked another Kilrathi design. This one is a Kilrathi female heavily inspired by the markings on the walls near the Tome of Sivar. Her stance is very similar to the ancient Kilrathi art, and the clothing and facial details were inspired by other Wing Commander sources. Prince Thrakhath's half-sister Zu'Kara and a Cult of Sivar Priestess from the 2655 Sivar-Eshrad ceremony, both depicted below, are two alternative examples that contributed to the piece. Ninjala's sketches will hopefully help AD create characters to populate his Half Life 2 project. 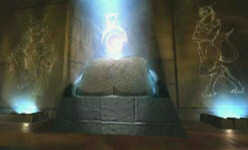 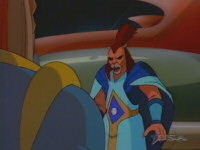 I tried to make the face not too cute.. otherwise it wouldn't be quite menacing enough.

Quite a bit of content filtered out of last week's Game Developers' Conference. One of many popular topics of discussion was the concept of "Feature IP" pushed by EALA vice president Neil Young. The influential Electronic Arts executive, who directed Origin efforts in the late 1990s, hosted a seminar that emphasized the importance of developing exciting game features at a foundational level. He believes that above the franchises or plot characters, a company should be looking at ways to capture people's attention through innovative play mechanics that make a game, series or company stand out. As he continues to be a potential overseer for any new projects associated with Origin, his passion for creating memorable experiences in games should be encouraging. You can read more about his talk at GameSpot here.

To illustrate the concept, Young discussed what he considered feature IP. One example was the introduction of Aspirations to Sims 2. "It coexisted with and leveraged the needs and motives system [of the original Sims]. It added a new dimension to the gameplay, because it gave you objective-based gameplay without breaking the game."

Young further emphasized the impact of feature IP when discussing Gameface, an innovation that allowed players to customize the appearance of their in-game characters and shipped with Tiger Woods 2004.

This success included a year-on-year growth rate of 44 percent and more than $40 million in revenue, as well as the ability to use this technology across games. For example, Gameface was modified for use in the Godfather game, under the name Mobface.