Four years ago LOAF managed to acquire twenty backgrounds from the WCA animated series, which we posted here for your enjoyment. There are still a lot of backgrounds out there somewhere, and fortunately Chris came across one on ebay. According to the seller it was shipped off to Korea for artists to do their thing before being returned to the US. The background shows a scene of water with the sun just appearing over the horizon, and an island with a volcano in the distance. The first image below is the background art, and the other two are screencaptures from the cartoon showing the background in its final form. There is a higher res version of the scan here. Don't forget to check out the previous backgrounds. 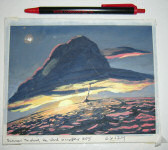 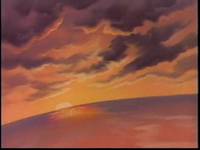 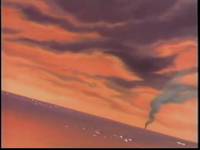 Since posting build plans for a Lego Dralthi last week, Staruss has been playing around with a program called MLCAD. The program is a kind of virual Lego environment allowing you to plan how to construct your various designs. By using it, Staruss has been able to reconstruct his Dralthi and is now working on a Lego Dragon. Unfortunately his camera is currently broken so there aren't any photos of the actual model just yet. 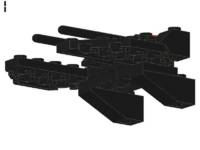 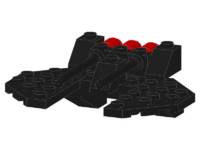