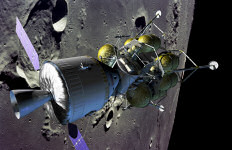 Today is also the anniversary of the unfortunate Challenger accident in 1986. Along with the Apollo 1 disaster on January 27, 1967 and Columbia tragedy on February 1, 2003, it's a somber time of year for the NASA space program. They have created a Remembrance Site to recognize these events. On the bright side, many revolutionary things are currently unfolding as well. This month alone, the Stardust capsule returned cometary debris to Earth, the first mission to Pluto was launched and the Spirit & Opportunity rovers celebrated two years of exploring Mars. Additional craft are now on the way to Mercury, Venus and Mars. New opportunities to research the Moon, Asteroid Belt, Europa and Saturn may also present themselves very soon. Death supplied this article that discusses these missions and more. As science fiction fans, we all appreciated the sacrifices made to get us this far and remain especially excited about things to come.

Before the end of the next decade, NASA astronauts will again explore the surface of the moon. And this time, we're going to stay, building outposts and paving the way for eventual journeys to Mars and beyond. There are echoes of the iconic images of the past, but it won't be your grandfather's moon shot. Image [above]: NASA's new crew exploration vehicle in lunar orbit - artist's concept.

This morning LOAF went to the Texas History Museum to see the new Roving Mars IMAX movie. He brought back a few neat pictures to share with everyone. 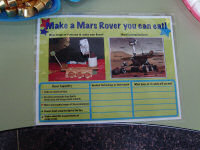 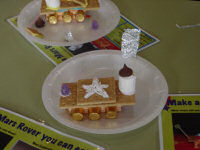 It's the story of Spirit and Opportunity, from their initial development (with lots of cool footage of the rovers being put together and tested!) to their mission so far.

Most impressively, however, it was a fitting tribute to the engineers rather than some sort of attempt to classify the mission in historic or nationalistic terms. Instead of bringing in a second tier Hollywood celebrity the movie was narrated by Dr. Squyres, the genuinely excited mission lead everyone took note of during the televised landings.